I met Sarah Firth when I moved to Australia the second time in 2013.  Sarah was for me THE graphic recorder, and I admired and still admire the great art she creates.  Sarah is an award-winning comic artist, graphic recorder, writer and animator based in Melbourne.

In this fascinating episode of Visual Friends podcast, we learn about how she grew up in Canberra and later travelled the world. We hear about sketchnoting and how it helped Sarah focus at school. How she started her a career as an artist and how she got into graphic recording around 2010. She shares an incredible story about a major accident she’d been in and how sketchnoting helped her reconnect with her life while she was in the hospital.

Sarah shares some tips about how you can improve your drawing skills over the years to become a rockstar in the field of graphic recording.

With that, please enjoy the episode and we look forward to welcoming you in person at VizConf on the 19th of October 2019 where we are privileged to have Sarah as one of our keynote speakers.

Sarah's amazing work on her socials

Sarah Firth is an award-winning comic artist and writer based in Melbourne. Since 2011, she has run a successful small business, offering graphic recording and facilitation, animation and event design. With the mission to help clients clarify, align, resolve, connect and communicate – through powerful visual modelling, storytelling and strategic mapping.

Alongside her business Sarah maintains a professional art and writing practice. Some notable achievements have been; receiving the Talking Difference Fellowship with the Immigration Museum, being named one of Australia’s top 25 artists by Art & Australia Magazine, winning The People’s Choice Award in the Australian Shorts section of the Human Rights Arts and Film Festival, performing at the Yogyakarta Biennale in Indonesia, the Lakes International Comic Festival in the UK, and the Ubud Writers and Readers Festival.

Most recently, she was appointed deputy chair on the board of directors for the Cultural Development Network, she received a Frankie Magazine Good Stuff Award, was a finalist in the Incinerator Social Change Art Award, and her graphic essay on complexity was listed in The Conversation’s ten best literary comics in Australia.

Sarah has a new illustrated book Badass Mums out now with Affirm Press, along with comics in upcoming publications with Allen & Unwin, Abrams Books and Picador Australia. She is currently working on her debut graphic novel thanks to the support of the Creators Fund. 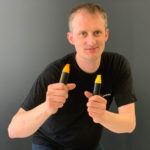